I like religious art, as anyone who has been to my house can tell.  Heck, I can find spiritual meaning even in pictures not intended as "religious," as evidenced by my last posting about the Summer Day picture.  Somehow, having such visual reminders in my home is comforting to me.

This picture called "Gethsemane" (by Marzani, I think)  is a favorite of mine.  I see this in every Christian book store and in the homes of some of my older relatives.  Not so much in younger households, which makes me old, I guess.  Maybe it's not popular now because it is so familiar that people don't give it a second thought.  Or maybe it's just too old-fashioned when there are so many cool new portraits of Jesus.  Whatever the reason, I think it deserves a poem.

PS:  Those are dried palms around the picture and crucifix, which is an old Catholic tradition. 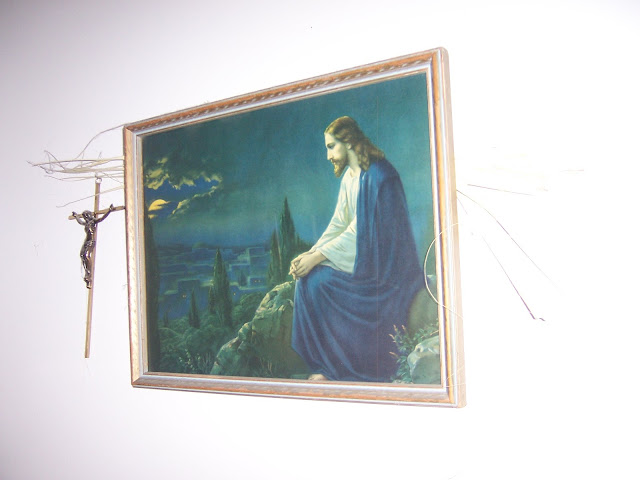 Such a famous print,
a portrayal of Jesus at night.
He seems calm yet sad,
quiet in the dark, a town nearby.
But what does it mean?
There are so many ways to view it.

Looks like He’s praying
off by Himself but never alone,
which He often did,
spending precious time with His Father.

Is He praying there
in the Garden of Gethsemane?
Has He seen it all
and then accepts the most bitter cup?

Is He thinking ’bout
His big entrance to Jerusalem?
Is He pondering
His death or the city’s future fall?

Perhaps He’s thinking
about His dear group of disciples.
How will they manage
on their own after He goes away?

Maybe He’s thinking
about the doubters and Pharisees,
His old friend Judas,
who are also all children of God.

Maybe He’s thinking
about the future of the world,
about the hardships
and victories yet to be seen.

Or is He thinking
about the people He’s healed and saved?
Or quite possibly
maybe He’s thinking ‘bout you and me!

My friend just told me a story about this print.

When she was growing up this picture was in her parent's house. They had to evacuate because of a flood and my friend wanted to take the picture along. Her father said, "Leave it here. Jesus will protect the house."
That picture hangs in her home today. :)