This week has been beastly hot in Nebraska (and other locations, too) so it brings Arizona to mind.  I was born there, but our family moved to Iowa when I was 4.

I have only been back 3 times:
once as a teenager on a family trip, once when my younger brother got married down there (where he was stationed in the Air Force), and once when Tom and I took our 4 young children for a visit.  The following poem is my favorite memory of that trip.  My most exciting memory was of the airport layovers to get there and back, but that's another story waiting to be written.  :)

In this story Joe was about 2 and a half and was only saying one or two words at a time.  That's why he didn't have the words to describe what he saw.
Amazingly, about a week after we got home, Joe started speaking in complete sentences literally overnight.  It was like he was holding back and absorbing the language until it made sense to him and he could use it like the rest of us.  He certainly didn't follow the gradual progression of language skills that our other children did.


A family trip
with our four children
from green Nebraska.
A chance to explore
the desert landscape
of Arizona.
The sun was so hot
it could melt crayons.
The cactus was tall
and prickly sharp, too.
Hairy, huge spiders,
three-inch cockroaches,
and coil'd rattlesnakes
were brand new dangers
for Nebraska kids
used to city life.

At my brother's house
where we stayed a week
our toddler Joe spied
something small and green,
quiet and so quick!
Joe ran to me and
pulled me to the spot,
pointing and panting,
couldn't describe it.
But I thought I knew,
I'd seen it before.
"Was it this big, Joe?"
I asked with hands out.
"Yes,yes," he nodded.
"Did it have a tail?"
He nodded again.
"Fast!" he said with a gasp.
"That's a lizard, Joe.
Lizards won't bite you."
But he wasn't sure
a lizard should be
loose inside a house. 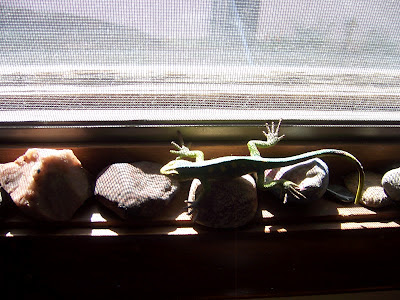 She questioned the abrupt ending and I explained it was like a punchline because I expected readers would be picturing the action taking place outside the house.

Having lived in AZ as a child, too, my sister said all along she had pictured it inside the house. She said she has fun memories of chasing those harmless lizards when they got in the house. Mom didn't enjoy those intruders, but they were fascinating to children and always eluded us.

Maybe that's why I have a small collection of rocks and plastic lizards on a sunny windowsill in my house. :)

So, I'm wondering if readers who didn't have the experience of lizards in a house would picture it outside. Feel free to let me know what you thought.