I read somewhere that humans are not fully alive unless we are creating.
I believe that is true.

I didn't write for many years because I thought I had nothing to say.
I didn't sew anymore because clothes are too quickly outgrown.
And I didn't do needlework anymore because I didn't think I had time.
Only in retrospect do I realize how important creativity is to my mental well-being and how much of me was lying dormant during those years.  But I look back and realize my creativity came out by helping and encouraging my children to be creative.  These photos are just a few examples.  I have so many more examples, but these make my point and make me smile.

I hope my children will always find outlets for the use of their imaginations. 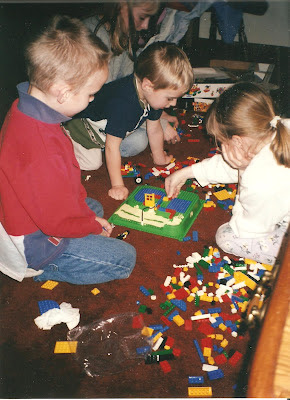 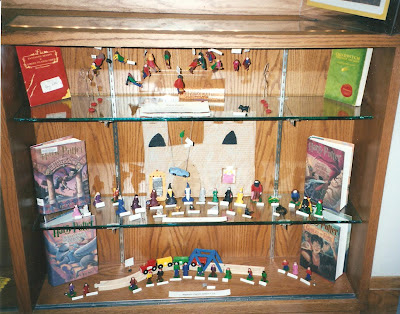 Carolyn's Harry Potter sculptures on display at the library in 2001.
She created all the characters before the movies came out. 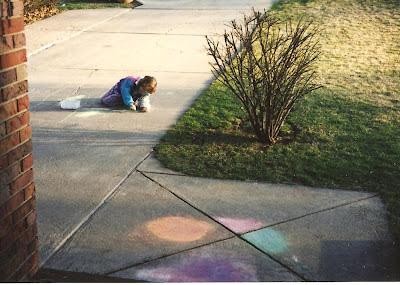 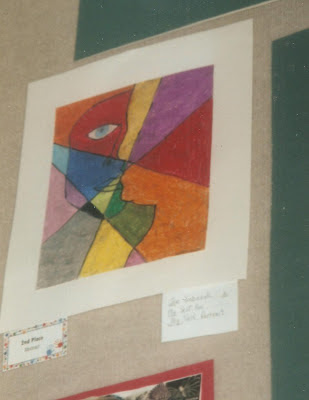 Joe's artwork on display at an exhibit in 2006.
He won 2nd place for this self-portrait. 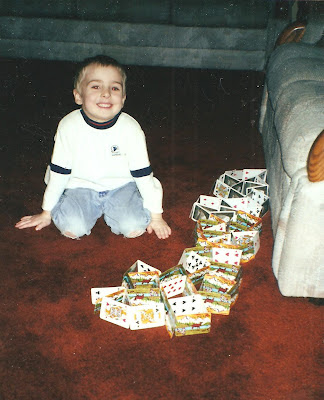 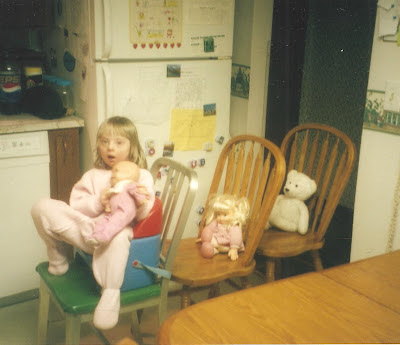 Monica's train comes through the kitchen in 2007.

What I've Learned... from carrying newspapers

A few years ago my two sons and daughter shared two newspaper routes for the summer.  They did it again the next summer and then kept it through the school year.  As it turned out, that winter was one of the snowiest we can remember.  I wrote this list when we were done with the routes. 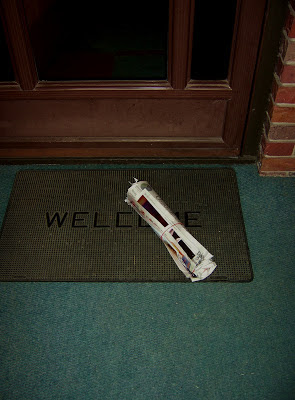 What I've Learned...
from carrying newspapers
by Janet Sobczykⓒ

I just wanted to explain something about the photos in my blogs.

Most of the poems are written long before I have an idea about a picture to go with them.  So, my first priority is to share the writing.  In some cases I can imagine the perfect photo for a piece, but just haven't found it yet.  For example, I know I have some cute photos of Monica crawling, which will be ideal for "Conquering the Stairs,"  posted on 9-16.  When I do find them, I can go back and add one.

Also, I hadn't figured out how to insert photos when I started the blog in June, so recently I went back and added a few (ex: the clown and ringmaster photo for "Motherhood is a Circus" on 6-26 and two for "The Grass is Always Greener Across the Street" on 7-19-12.)

The quality of the photos is purely amateur with a simple camera.  Many of them are getting pretty old.  But some are recent shots or taken to help visually place the poems in context.  I try to keep my blog uncluttered, with a lot of white space, but I think the photos add a necessary visual appeal, and I enjoy them.

I will continue to add photos for old posts whenever I can.  Feel free to scroll through quickly for any you might have missed.  :)

What I've Learned... from an exchange student

All of the anti-American sentiment in the news makes me think of the two exchange students we have hosted.  I wonder what they think of the news and what they say to others about Americans.  I know I enjoyed getting to know these young adults venturing into another land.  I learned so much from them and I hope they learned from us, too.

I compiled this list just after our first student left and I was feeling her absence so keenly.  I didn't want to forget what I had learned from her or noticed about her.  I gave her a copy of it then, and I hope she won't mind my sharing this now.

If you ever have a chance to host a student, please do!  I know several families who have, and continue to do so.   I think opening our homes and hearts to exchange students helps them see us as we are instead of as we seem on screen.  Honestly, I don't think we come across well in movies so full of violence, soap operas and reality shows so full of immorality, and Youtube videos that can be just plain stupid.  It makes me sad that the media can't see the harm that is done in the name of entertainment.


At the airport picking up our first exchange student -  summer 2008.

What I've Learned...
from an exchange student
by Janet Sobczyk, 2009ⓒ

What I've Learned... about first-graders

I have been compiling a series of short lists about the things I've learned from the different jobs or experiences I've had.  This one is about working as a para in a first-grade classroom, which is what I've been doing for the last 3 years.

The apple basket photo is a close-up of a picture in my home (by Mark Stuart). 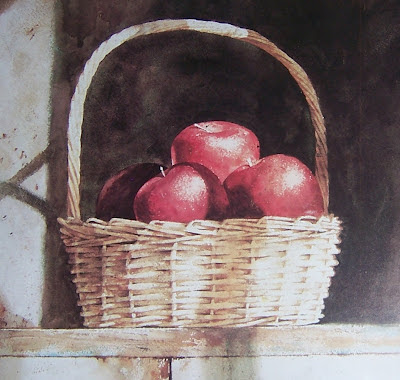 
This is a good back-to-school poem because it takes place mostly while I (as a child) am away at school during the day.  It seemed unbelievable to me at the time, and still does, but it is true.  However, as the snail aged, his journeys became less frequent and he stayed a lot closer to the bowl.

A goldfish bowl
Needs a good snail
To keep it clean.

I picked a big one
A big, round black one
To live with my fish.

It didn’t stop there
To admire the view
It kept on going!

Down the glass side
On the table
But where to next?

It didn’t turn back
My silly black snail
Just kept on going.

Down the steep wood
To the carpet
But where to next?

The vast carpet loomed
Like a yellow sea
But snail wasn’t scared.

He slowly crawled
Inch by long inch
And kept going.

Across the big room
He found my new bed
And climbed up the post.

School was over
So I came home
And found my snail.

He must have been sad
To be found that way
And then carried back.

Back to his bowl
So small and cold
What to do now?

Wait until morning
‘til I go to school
Then set out again.

Yes, he did this
Day after day
A new journey.

To the big dresser
To the windowsill
To the wicker chair.

To the closet
To the toy box
To ev’rywhere!

He liked adventure
The thrill of the climb
The marvelous views.

The room’s so big
He must have thought
It was the world.

And when I got home
I never quite knew
Where I’d find him next.

It's Better to Give And to Receive

This poem naturally follows after the "Phases of Love" poem because it also portrays stages of life.

It’s Better to Give And to Receive
By Janet Sobczyk, 2011ⓒ 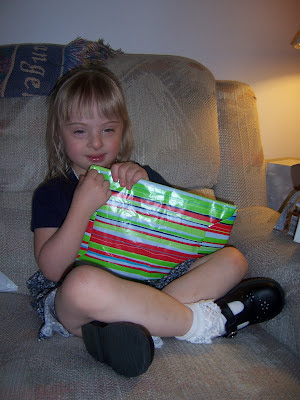 Most children
get used to receiving a lot.
They are happy to receive
time and love
food and shelter
gifts of toys.
They need to learn to share,
take turns, and to lose a game
with their friends and family.
So parents teach them how to give.
Most parents
get used to giving a lot.
They are happy to give
their time
their money
their talents
to their families and neighbors,
schools and communities.
They give until
it becomes hard to receive.

Grandparents
have given their all.
They may see their
savings dwindle
energy sag
memory fade.
Then they need help
from family and neighbors,
AARP and Medicare.
So life reminds them how to receive. 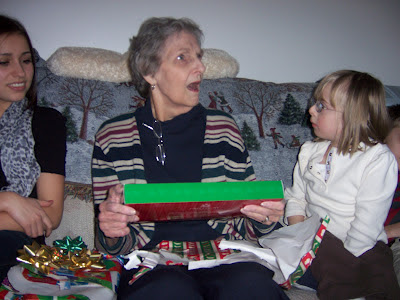 Jana, Grandma, and Monica - Christmas 2008
Posted by Janet No comments:

I wrote this poem after taking a class on Human Growth and Development.  It was interesting to read in the textbook about so many stages in life that I'd already lived through, to see the stage my parents were in, and to look ahead at the stages in my future.

The obvious time to post this poem would be Valentine's Day, but I chose now because my two sisters and I all have wedding anniversaries in September.  Happy September anniversaries everyone!

Two people fell in love.
He loved her laugh, her beauty,
and skills with cooking.
She loved his eyes, his calmness,
and sense of humor.

They talked about marriage,
about their dreams, and children.
They shopped for two rings,
made announcements, set a date;
plans fell into place.

The big day soon arrived.
He was happy, she just glowed.
She walked down the aisle,
wowed the big crowd, they said vows,
then he kissed the bride.

Their honeymoon was grand.
They flew away, for a week,
to walk on the beach,
hold hands and kiss, and relax,
loving every night.

Next they bought a house,
did some painting, laid carpet.
They filled it with stuff,
good cooking smells, and laughter.
It was what they’d dreamed.

Soon a baby arrived,
to change their lives, forever.
With smiles and gurgles,
frequent feedings, sleepless nights,
and all those diapers.

Baby worked hard to crawl,
and then to walk, next to run.
Toddlers turn into
children and then, teenagers,
each phase a challenge.

Life got much busier.
Car pools and school, and more kids,
time flew by so fast.
With stressful jobs, lots of bills,
aging parents, too.

Their worries and cares grew.
Tensions emerged, pulled apart
by their hectic lives.
How well could they, or would they,
keep their love alive?
Don’t be a statistic,
stay together, for the kids,
was their decision.
Ride out the storm, and then hope,
for much better days.

The nest became empty.
How could kids leave?  It’s too soon.
Now what will they do?
Renew old ties, use the time
for themselves again.