A Poinsettia at Easter Time 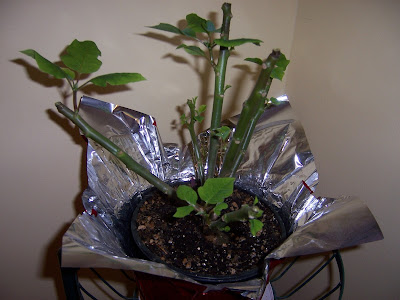 A Poinsettia at Easter Time

Every year at Christmas Tom gives me a poinsettia plant.  And every year when it looks all dead in late January, I throw it out.

This year I learned that poinsettias are a lot like rose bushes.  If they are pruned, they survive a dormant stage and sprout greenery again.  So I tried it and was tickled to watch it coming back to life!  I realized that this plant's stages have a tangible correlation to Christmas joy (in its red and green beauty), Lenten sorrow (in its dying), and Easter Resurrection (in its new life).

I don't have much of a green thumb, and many would think my "revelation" is elementary, but watching that plant change from December through March has given me a lot to think about this Lent.  Not just about Jesus' birth, death, and resurrection, but about the daily deaths and rebirths, losses and gains, that humans experience in our daily lives.

Seeing that plant turn green after looking so black and wilted, gives me hope for healing in any areas of my own life that have felt dead and lifeless.  It helps me to remember that painful losses are our pruning, and with time and patience and care, the pruning can lead to beautiful changes.

Happy Easter to all!

I wrote this poem as part of a series on pets we had when I was growing up.  The variety of pets we owned in Iowa is a testament to my mother’s love of animals.  That legacy continues with stories of pets that my children have had, too.

The ending of this poem is a happy note that we made the right decision for the ducks.  But as a child, I was sad that the ducks did not come to us or seem to remember us.

Important note:  I do not endorse giving baby ducks or chicks to kids for Easter, unless the family lives on a farm.  I recently read an article about a duck rescue org that gets flooded with Easter ducks when the family realizes how much care (and poop scooping) they require.  Some people think these ducks can just be released at a pond or lake, but ducks do not usually survive the transition from tame to wild.  It's just as abusive as abandoning an unwanted cat or dog.  So please do not consider this a promotion for giving ducklings as gifts.

One Easter I got a gift,
a most unusual gift,
a cute little baby duck.

My sisters got ducklings, too,
and we loved them as our own,
three baby ducks for three girls.

We didn’t live on a farm,
Dad was a city banker
and Mom just loved animals.

The ducks stayed in a small pen
in our warm basement at night,
and played outside everyday.

Their little fuzzy wings grew
and sprouted long, sleek feathers
which they flapped and learned to fly.

From our shoulders they took off
and then fluttered to the ground,
like proud mamas we helped them.

Ducks in the city, oh my!
Cars would pull over to watch,
It was an amazing sight.

When they became fully grown
we knew they needed more room
to swim and fly and be free.

So we took them to a farm
and said our last sad goodbyes,
we hated to leave them there.

But we went back to visit
and found our three ducks swimming
on a pond with their new flock.

They looked happy and took off
with dozens of other ducks
soaring up into the sky.

This is a lantern poem.  The lines have syllables from 1 to 5, which creates the shape. It's about a small St. Patrick's Day decoration that I display on a little shelf in our bathroom each March.

One year the leprechaun started moving around the room.  I never knew for sure who was placing it in different spots each day, but I suspect my husband started it and the kids joined in.  It has become a bit of a tradition that the leprechaun moves each year.

Last year I took photos of his "antics" and then shared the story with the first graders where I work.  I could honestly tell them I've never actually seen him move, but somehow he ends up in different places. Their reactions changed from disbelief to excitement when I showed them the photos.

Some students thought the photos proved he was real, like the characters in  the movie, "Toy Story," which come alive when people aren't looking. They named him Lucky and wrote sentences about him.  Their illustrations were priceless.  :)

Green
Plastic
Moves unseen
Surprises me
Where will he be next?

Some schools celebrate St. Patrick's Day a little differently.  Instead of everyone wearing green, students are encouraged to wear the colors of their heritage or an ethnic costume.

In 1998 this is how my two daughters looked in Polish heritage costumes (not authentic).  They took homemade Polish cookies to their classes as a treat. 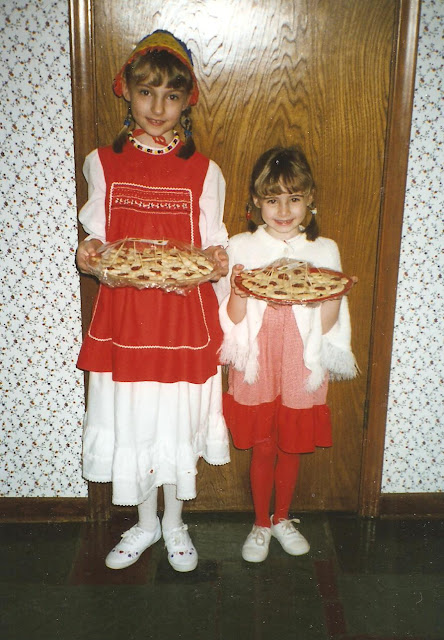