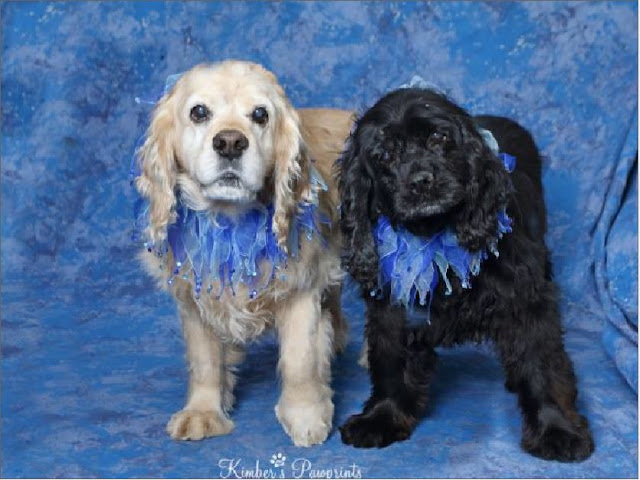 This is an adorable photo taken at the Nebraska Humane Society to advertise these 12-year-old Cocker Spaniels.  They were possibly  litter-mates, but definitely lived their lives in the same home and needed to stay together. They ended up at NHS when their owner passed away.

They had been at NHS for over a month when I spotted them while making a donation of old towels. Lacey (on the right) hooked me with her quiet smile and cute head-tilt.

Tanner was taking his afternoon nap, so he didn't impress me much at first. But he had a chance to show his mellow, grandpa-type personality when I brought the whole family back to meet them.

They were both so affectionate to all of us right away. They even accepted our old Cockapoo, Lulu, without any issues. So we took them home that day, a week before Thanksgiving.

The timing seemed like a poor choice with family coming home soon, but it worked out fine. The three dogs were a little underfoot, but they increased the affection level in our home enormously.

Ironically, two months before we adopted these two, I had posted a poem about adopting Lulu on the NHS site. (The photo below was taken in 2013, shortly after we adopted her.) The poem is even more appropriate now that I have three eternally grateful shadows. 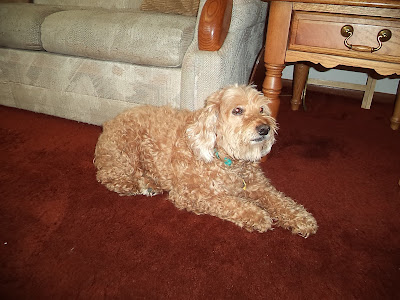 My shadow
not just a sunny-day presence
she's there rain or shine.
Not a replica of me in silhouette
she's entirely herself
with four legs
and blonde, curly fur.
She mirrors my love
lies near my feet
follows me around
eternally grateful for being adopted.

I love this story. I am glad you were able to keep the two together and give them a good home full of love. My cat Sammy is the my soul's other half. She really is a reflection of me.
Amzel :)

Amzel, thanks for stopping by and leaving a comment. Animals are truly amazing. We can learn so much from them. :)