I saved this post until September, the "anniversary month," because my two sisters and I all got married in September (to spouses, not to each other.)

This syllabic poem of mine, called "Phases of Love" was published in Screamin' Mamas magazine this year. It's about all the predictable phases that a couple goes through in a lifetime together.

I wrote it after taking a class in Human Growth and Development six years ago, and posted that incomplete version on this blog on 9-6-2012. This new posting includes the last two stanzas, which were added after Mom passed away. 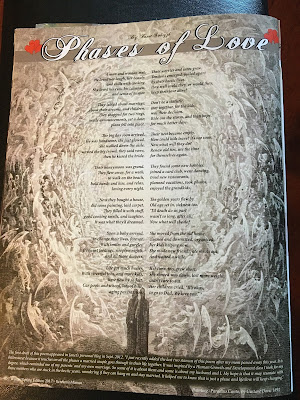 Phases of Love
By Janet Sobczyk 2011ⓒ
Two people fell in love.
He loved her laugh, her beauty,
and skills with cooking.
She loved his eyes, his calmness,
and sense of humor.

They talked about marriage,
about their dreams, and children.
They shopped for two rings,
made announcements, set a date;
plans fell into place.

The big day soon arrived.
He was happy, she just glowed.
She walked down the aisle,
wowed the big crowd, they said vows,
then he kissed the bride.

Their honeymoon was grand.
They flew away, for a week,
to walk on the beach,
hold hands and kiss, and relax,
loving every night.

Next they bought a house,
did some painting, laid carpet.
They filled it with stuff,
good cooking smells, and laughter.
It was what they’d dreamed.

Soon a baby arrived,
to change their lives, forever.
With smiles and gurgles,
frequent feedings, sleepless nights,
and all those diapers.

Baby worked hard to crawl
and then to walk, next to run.
Toddlers turn into
children and then, teenagers,
each phase a challenge.

Life got much busier.
With stressful jobs, and more kids,
time flew by so fast.
Car pools and school, lots of bills,
aging parents, too.

Their worries and cares grew.
Tensions emerged, pulled apart
by their hectic lives.
How well could they, or would they,
keep their love alive?

Don’t be a statistic,
stay together, for the kids,
was their decision.
Ride out the storm, and then hope,
for much better days.

The nest became empty.
How could kids leave?  It’s too soon.
Now what will they do?
Renew old ties, use the time
for themselves again.

The golden years flew by.
Old age set in, sickness too.
“’Til death do us part”
wasn’t so long, after all.
Now what will she do?

She moved from the old house,
cleaned and downsized, organized,
her kids helping now.
She made new friends, ate meals out,
and waited a while.

Her time, too, grew short.
She slowed way down, lost more weight,
didn’t care to eat.
Her children cried, “It’s okay,
go to Dad. We love you.”