"A Labor of Love" Published

The article and photo appeared in the September 2019 issue of "Your Country Neighbor."

This summer I moved a library.

I didn’t move near a library. I literally moved a small school’s library from one room to another down the hall. Actually, students helped pack the books into boxes last May. Then they stacked them in the lobby. 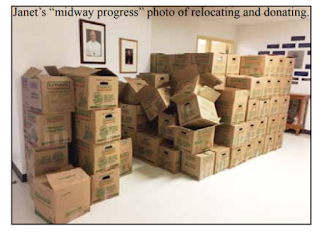 In July I began sorting them out because the new space is smaller than the old library space was. I weeded out duplicates and old books that hadn’t been checked out in years. I looked at every book card to make sure so I wouldn’t get rid of a well-worn favorite by mistake.

The second day into the project someone asked for donations for an organization that ships thin, paperback books to a school in Uganda. They received five large boxes; it felt great to see them put to good use.

The rest of the weeded-out books were boxed for a charitable organization here in Omaha, then we loaded them into two school vans. I drove one of the vans myself and acted like a mother hen as they were unloaded. I love books, and needed reassurance they would make their way into children’s hands from there.

The huge pile of books to keep I had already loaded onto the shelves as fast as I could. The goal of getting the lobby cleared out by the start of school had been a palpable weight on my shoulders, but the mission was accomplished. Organizing the books in ABC and Dewey order will still take some time, but it’s looking like a library already.

I know the administration appreciated all my work. However, when my daughter (a student at the school) walked in and immediately found items she wanted to check out, that was all the thanks I needed.
Posted by Janet