This article and 2 photos appeared in the July 2019 issue of "Your Country Neighbor." 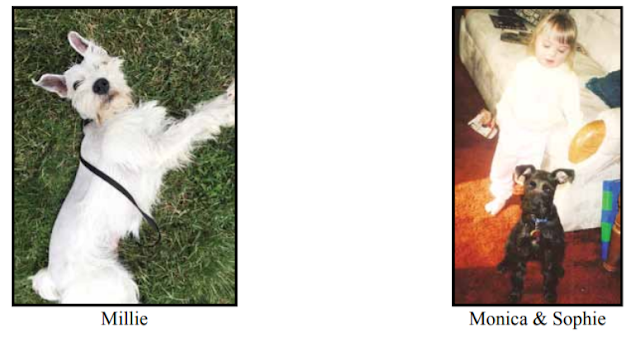 We recently adopted Millie, a 15-month-old Miniature Schnauzer, from the Humane Society. She’s very well-mannered with only a couple of flaws: a penchant for nibbling plants, and a misconception that we expect her to be a big, brave guard dog. The latter is probably why she was surrendered from her original apartment home.

Her pointy, radar ears don’t miss a thing. Sometimes a sound outside will bring a low growl while she assesses the origin. Other times she immediately sounds the alarm with a piercing bark meant to scare off burglers, roaming critters, and any brave leaves that rustle down our sidewalk. Unfortunately, her “intruder alert” doesn’t seem to deter salesmen from knocking at the door.

She tries to appear brave, but is actually skittish. Taking her on walks is an adventure because so many things seem new to her. Our usual course takes us past a school yard and close to a baseball backstop. The first time she saw that tall, chain-link structure she sounded the alarm and examined it from every angle. She kept scolding it, barking over her shoulder, as I led her away. An overturned garbage can brought the same reaction.

Even though she’s over a year old, she is still very puppy-like, which is quite a change for our household. The last three dogs we adopted were senior dogs that were very calm and seldom barked. We cared for them in their final years, knowing our time would be short. It felt good to be there for them when their original owners couldn’t be, but it was hard to see their rapid declines. I wasn’t ready to go through that again, so we chose a young dog this time.

The last puppy we adopted was 15 years ago. That puppy was a Schnauzer-Terrier mix and very similar to Millie except in color. Sophie was black, but Millie is silver. We have fond memories of Sophie growing up with our kids, but frankly, I’d forgotten the sheer joy that a playful dog can bring to a home. Old dogs don’t chase balls or go very far on walks. Millie loves walks and balls and stuffed squeaky toys. She even entertains herself by tossing the toys in the air and chasing them. Or maybe she’s showing off to remind us it’s play time.

With five people in our household she doesn’t lack for a playmate or a comfy lap. She loves us all and spreads her affection liberally. Aside from her bark, she’d make a great therapy dog. She has the ability to bring one’s stress level down within moments of welcoming her onto a lap. For example, I recently experienced some computer glitches that made it impossible for me to accomplish a task on time. I was ready to burst into tears. Instead of throwing the laptop I picked up the dog. Her snuggles worked wonders! My frustration melted like an ice cube in a glass of tea at a July picnic.

Speaking of July, the 4th will be here soon and so will fireworks. I can only imagine Millie’s reaction to those. I better shop for a thunder vest for her, and maybe doggie ear muffs, if there is such a thing. She’s tiny in stature, but I can imagine her on full alert, telling off those noisy, flashy intruders, ready to brave the unknown for her new family.
Posted by Janet